It limits them to a certain level.  It is most successfully employed after a period of inbreeding, when genetic dominance of the foundation rollers has been achieved.  It is also quite often used to assist in upgrading a stud of rollers that is not sufficiently high in quality for close inbreeding.

The relationship involved in line breeding is brother to sister that has been mated to other birds.  Second cousins are the offspring of first cousins and so on.  Other line breeding mating includes aunts to nephew.  An aunt is the sister of the nephew’s mother.  Also in this category is the uncle to niece mating.  A niece is the daughter of the uncle’s sister.
The drawback of line breeding with aunt to nephew, uncle to niece and other more distantly related cousins are that their degree of relationship is too distant to achieve a restricted pool of genetic influence. Since the goal is to achieve genetic similarity to the foundation cock, mating such as these, cannot achieve this goal and retard the objective of founding a true roller breeding strain.  In addition, should line breeding be combined with the frequent use of outcross mating, it becomes impossible to direct favorable genetic influence.

Brother to sister or half-brother to half-sister mating are not often resorted to in the first year of breeding.  These matings are more likely to be made after an established inbred strain of rollers uses an outcross.  They are in the nature of gamble, in the hope that the foundation cock’s factors which the young have inherited could recombine.

The following diagrams will illustrate brother to sister and half-brother and half-sister matings:

As you can see from the illustrations above, the only chick for the breeder to keep from the matings would be the ‘1/2F 1/2F’ roller, providing it does reflect the character of the foundation cock.  As we discussed earlier, the in-breeding aim is to establish a strain of rollers that will give 70% or more quality young.  Therefore, a mating, which offers only 25% chance is not very attractive to the breeder.  Keep in mind that there are so many variables and ways in which the chick could be lost between egg and perch.

Other matings involve the course of time would be uncle to niece and aunt to nephew breeding.  Except after a period of inbreeding, these mating groups are too distantly related to achieve the restricted genetic combination.  For this example, let us assume that in breeding the niece, the breeder mate a non-related roller to her mother and let’s identify him as ‘G’.  The following diagram will explain how these across the board matings will reduce the influence of the foundation cock: 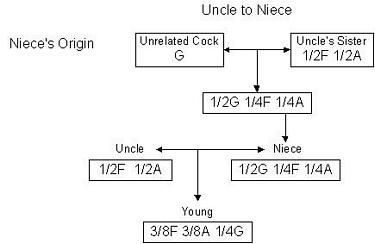 As you can see from the above illustration, the results from this matings gives young just slightly more closely related to the foundation cock ‘F’ than the niece, but not as close as the uncle, who is the foundation cock’s son.  The mating of the aunt to the nephew gives the same result, and obviously, these across the board matings do not make any progress toward the majority influence of the foundation cock’s character.

They are normally used to upgrade a strain of rollers not yet good enough for inbreeding or after a period of inbreeding when the genetic majority of the foundation sire has been achieved.  The following diagram will illustrate the cousins inter-mating:

In conclusion, while across the board matings in this article are discussed, remember that these rollers possess only ¼ to ½ of the foundation cock factors.  This means that ½ to ¾ of their genes are from a variety of ancestors.  Therefore, they do not fulfill the purpose of inbreeding, which is to have at least a majority of the factors of the foundation cock.  The back pairings are the crucial ones, which step by step will bring the breeder closer to the goal.

When this has been reached, terms such as cousins, aunts, uncles etc. are obsolete.  Matings are then made solely on selection and visible form.  This is the fine-tuning stage.  There should be very little visible difference between each roller and no matter how they are mated thereafter; the foundation cock is the major influence